Tainá Guedes, founder and driving force of the Entretempo Kitchen Gallery, talks about Food Art, Berlin and her vision for a better world via the interaction between food, art and society.

Answering to a need for public discourse about tangible, every day values and how they relate to socially conscious practices, the  hybrid terrain where food meets art is steadily growing. One can argue that there are precedents – the multidisciplinary creativity of Ferran Adrià  or the relational performances of Rirkrit Tiravanija come immediately to mind – but it is only recently that the term Food Art has been discussed, increasingly attracting momentum as a movement.

Artists that use food as a medium to examine how it relates to art underline both as simultaneously essential human concerns. By highlighting the interaction of eating, art and society they also discover a cultural expanse not only fascinating but also curiously unexplored, at least beyond the field of highly specialized experts.

Perhaps it is this very public and accessible dimension of Food Art that is the most important aspect of it. In much the same way that Pop Art used signs and symbols that were familiar to the widest possible audience in order to attract attention and disseminate intellectual arguments about the society of the spectacle and consumerism, Food Art invites artists and audiences to “play with their food”, alight hearted gesture that ultimately involves everybody in philosophical debates that otherwise would remain accessible to those with a specialist interest. 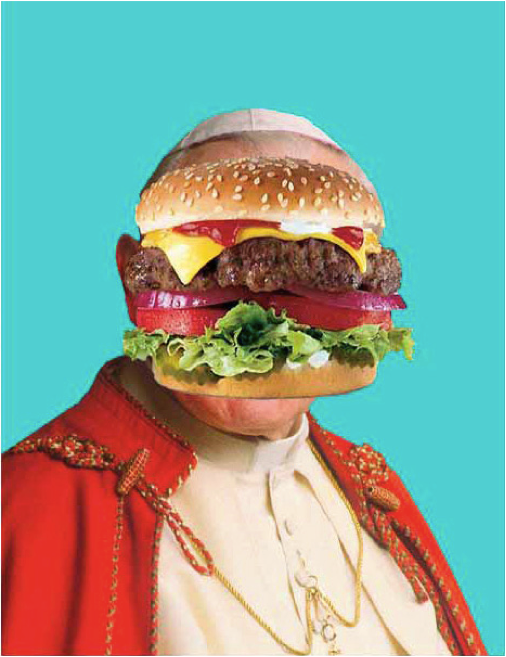 Collage by Jorge Chamorro for the “Food in Context” exhibition, at Entretempo Kitchen Gallery.

Developing in parallel to the contemporary art world obsession about all things technological, digital and online, Food Art is arguably answering to a demand for meaning that is derived from experiences that are directly rooted in real life and anthropocentric semantics.

It is also a particularly organic plateau of thought and creativity, defined loosely enough to grow multiple roots in various disciplines, as the conceptual net of Food Art stretches far and wide, capturing relevance and content from incongruous yet productive collaborations and unexpected relationships between such disparate fields as the politics of the agricultural industry to performances researching the tactile sensuality of human interactions.

Of Brazilian-Japanese background, long-time Berlin resident Tainá́ Guedes is a leading figure of the local Food Art scene. Involved in both the contemporary art world and the food scene, with experience in many related fields, such as media and event organizing, she is an ideal catalyst and impresario both for hosting a location that can showcase Food Art but also as a spokesperson about the movement.  Opening earlier this year to rave reviews and a flurry of activity, her Entretempo Kitchen Gallery space in Prenzlauer Berg is already a home to multidisciplinary projects that foster Food Art in a casual yet decisive manner.

Operating as a curator, performer, chef and all-around food enthusiast, Guedes is not only the founder of Entretempo but also an active instigator and multi-tasking participant. Both in her own space, but also in various locations all over town, from food festivals to cemeteries,  she stages adventurous exhibitions, workshops, seminars and various other activities, including idiosyncratic cooking classes.  Her work is as poetic and imaginative as it is representative of a moment when the zeitgeist is not only aligned to the cause of a better world, but our collective consciousness is seeking radically new methods to achieve the change we need. 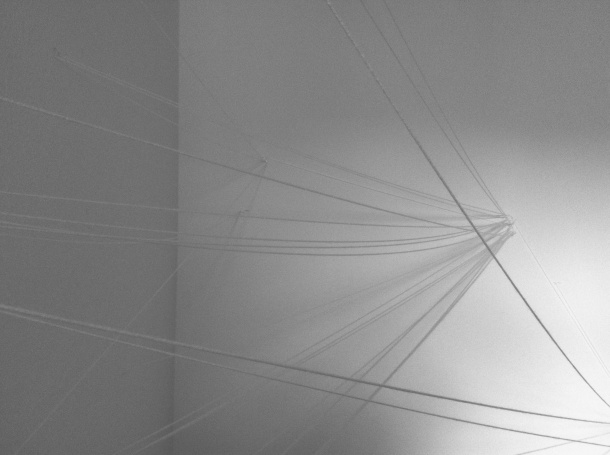 Installation view from the “Foodway” show at Entretempo Kitchen Gallery

Where did you grow-up, and how did this environment inform what you do now?

I was born in Brazil, daughter of an artist and a literature and art teacher. My parents use to practice macrobiotic for years. George Osawa created Macrobiotic in the 60’s, using as basis Shojin Ryori, the ancient Buddhist vegetarian cuisine to create its principles.  I also went to the Waldorf School, where I had my first contact to the biodynamic.  Of course, at that time I didn’t realize how this would impact my life later. But when I was 28 years old, just after have formed as Chef de cuisine, I went to Japan to study Shojin Ryori, and started connecting both philosophies, applying them into my life and work.

How did you decide to live in Berlin? What is your personal relationship to the city? How does the city relate, respond and inform what you do?

I decided to live in Berlin because here I found many people who share with me the same thoughts and philosophy. People fighting against waste, wanting to change the world, working with Food Αrt… You know that sentence from Yoko Ono: “A dream you dream alone, is just a dream. A dream you dream together, is reality”? That makes much sense for me.

Berlin is still evolving as food scene. How does this fact inform the interaction between food and art that you are investigating?

I see the movement of food art growing everywhere, not only here in Berlin. But Berlin is definitely the perfect place to grow the Food art revolution, because here everybody wants to do something to improve our World. They are ready to do something, to change something, even if that means earning less money. The other aspect is that artists, designers, architects, people from different disciplines are more and more using food as a medium to communicate. A coincidence or not, many artists are good cooks and many artists living in Berlin need to cook in order to pay the rent. So either they are already good cooks or they become a good cook. My theory is that everybody is an artist (mentioning Joseph Beuys) and everybody needs to eat. So both, art and food are universal. Combine these two ingredients and you will have an amazing recipe to change the World!

“Maggot” by Anne Dukhee Jordan, from the Art Garden by Entretempo Kitchen Gallery

You are influenced by the Japanese concept ‘mottainai’, which is about making food without any waste, while issues like recycling, reusing, and reducing are also present throughout your work.

I really appreciate chefs and brands working against waste. They inspire me a lot! We are lucky that we can find a plenty of them in Berlin!

What is your favourite every-day food in Berlin and what are some exceptional food experiences that you have had in this city?

I recommend trying all breads from Märkisches Landbrot Bakery (you might find them at Bio company supermarket); Going to work on the field that actually feeds you and participating in a solidarity agriculture, experiencing the taste of unusual vegetables of Speisegut; Eating ugly vegetables and fruits at Culinary Misfits Cafe; Visiting the Ecological Street Market organized by Grüne Liga at Kollwitzplatz, Prenzlauer Berg (for cheese and champagne);  visiting Markthalle Neun.

When I decided to open Entretempo Kitchen Gallery, I was missing a place where we could bring together my philosophy and people from all disciplines to explore together the many aspects of Food Art in our society and at the same time answer together questions for the Future. We have invitations to make Entretempo pop-up gallery in Sao Paulo, Rio, Paris, London, Los Angeles, along other cities in Germany. I am organizing my self and my small team to attend to these invitations.

What kind of exhibitions have you put on until now? What is the artistic vision of The Entretempo Kitchen Gallery?

Our first show was a collective exhibition, exploring the different possibilities on Food Art. A Food performance “Frankenfood” by Iara Guedes, a critic on the genetically modified vegetables, “Strawberry canon” by Anne Duk Hee Jordan, a garden installation by Lynn Peemoeller, an interactive sharing platform by Lenara Verle and a socio-political-environmental related installation, “Food ways”. Our second exhibition was a solo with the Mexican artist Mauricio Cervantes. Mauricio has been working with bees and is politically engaged since more than 22 years. We also founded together with Grüne Liga an art garden at a former Cemetery in Prenzlauer Berg. The third show was with the award-winning artist and designer Eszter Imre, with porcelain works. After her show we again hosted a group exhibition in collaboration with Agora, curated by Caique Tizzi. Then Tomás Espinosa, on forms and identity of vegetables and fruits. Then came “Food in context”, curated by Elizaveta Barsegova, bringing together, fashion photography, collages and a critical work “final meals” by the US Collective Lucky Pierre. And finally, one can visit our current  show “White” – Literature meets Food Art, open until the 5th of February. My idea is to bring the spectator always a different feeling on how we can perceive food, inspiring and awaking consciousness.

Tell us a bit about ‘White’ by Helene Lundbye Petersen.

“White” by Helene Lundbye Petersen, is about her first book, The White Book, which conceptualizes white as holding the qualities of being an inclusive space that is open and free and to inspire the new. One area, which urgently calls for rethinking is our overly complex industrialized food system. Placed on the political global agenda in needing to solve the problem of how to feed an ever-growing population and maintaining a sustainable world, food raises logistic and ethical questions in relation to production, health and waste. As part of the program we receive “The Monochromes” the authors of the book “12 Colors, 12 Menus” for an interesting food experience with Helene. On the 3rd of February we have planed the finissage with a performance by Camilla Gonzatto with the artist.

How do you choose the artists that you collaborate with? What are the criteria?

I am always looking for artists working on the field of Food Art and interested in “making our world a better place”. We receive many artists and proposals per week, because we are accessible, people feel free to talk to us. And that is important because I believe the development of real innovative ideas can only happen in the atmosphere of interaction and exchanging.

What are your ambitions for Entretempo? What part of the art and food world in Berlin do you wish to represent? What are your future plans?

We have several parallel projects going on at the moment. “Welcome to the Future” is a three years project with Grüne Liga, the landscape artist Jean Paul Ganem, Humboldt University and Akademie der Künste, bringing together people from all disciplines to think and live the Future. This spring Berlin Kids Weekend in partnership with “little pop up” will unite organic fashion brands for kids, food and art.  Berlin Food Art week is taking place at different locations in Berlin during the celebration of one year of Entretempo in June 2015.

‘White’ by Helene Lundbye Petersen is on show until the 5th of February 2015 Opening hours: Tuesday to Friday 10:00 to 15:00, or by appointment Senefelderstr. 29 | Entretempo Kitchen Gallery

One thought on “The Berlin Agenda Interview: Tainá Guedes”

An online manifestation of Berlin as a state-of-mind

The Berlin Agenda is about arts, letters and the other side of midnight; it's provocative, fun, street-wise and worldly. It's about this, that and a bit of the other. It's the mix, and above all the people who stir it.

Check this space for regular updates about all you need to know about the best Berlin has to offer to a world dreaming of Berlin.